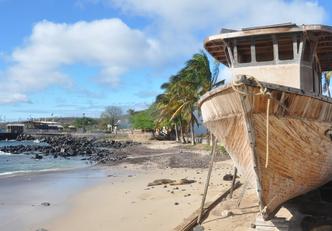 Many worlds have been built not only with houses and streets but with stories and anecdotes. San Cristóbal is a place with exuberant information that has filled the area with myths and human experiences. These stories are the soul of the local town, giving this area personality and character. Below are some of them.

When I first came here, I was told that there were hidden treasures, very valuable, from pirates. The famous pirate known to have lived in San Cristobal was named Lewis.  Lewis  settled in Puerto Baquerizo Moreno after the murder of Manuel Julián Cobos. The pirate lived peacefully with his memories and occasionally disappeared and returned with money, sterling gold, or Spanish doubloons. I was told that he used to slip away in a rowboat towards Barington Island, where he had his treasure hidden. Nobody knew exactly where he got his money from. The Lewis Pirate took his story and grease to the grave.

I do not know sterling gold, but some islanders say that they have seen it at night, in the distance: auric reflections that can only be caused by the spontaneous combustion of buried precious metals. At any rate, one must be cautious: if you are a fan of hidden treasures and visit San Cristobal Island, do not forget to bring a metal detector.

Cited by Enrique Freire Guevara, in his Chatham Legends, who Jorge Sotomayor heard about, from whom I was told by Manuel Augusto Cobos, and I certify having heard of it, because they told me about it a thousand times.

Luis Aníbal Paz, the man of skillful fingers, called the Quito Eagle, was in San Cristobal: "...He told us that he had served his sentence, that he did not hurt anyone because he always tried to be fair with the poor and steal only from the rich and wealthy, alongside his buddy, another thief nicknamed Star. Despite his glibness, I was very skeptical... At some point we saw a sailor approaching. The Eagle eyes twinkled. 'Hey, he says, stay over here that I am going to show you something. And he points at the sailor: look over there, there is a sailor coming, do you want to see how I pull out his wallet without him noticing?', he asks. Seeing is believing, we nodded and started staring at the scene. The thief stood up and walked past the sailor. His hand was faster than our sight. He then returned to us, as if nothing has happened, while the sailor rummaged his pockets. This poor guy has lost his wallet, the Eagle says. Look over there!! I did not steal it, I just found it lying on the sand... And the poor sailor searched everywhere with no luck... Shortly after the Calderon ship sailed, we never heard again of this curious man nicknamed The Quito Eagle."

Taken from the Path that Darwin didn't take. Quoted by Eulalia, widow of Mr. Rebelo.

"These lands are risen from the deep sea by the burning pulse of active volcanoes. Uninhabitable, barren and gray lands, governed by harrowing loneliness and rocks hit by the fury of the waves again and again.  It is a hell in the middle of the ocean. And the greatest feature of this hell, the worst curse of this place, is that change never visits them. Neither the change of the stations, neither the change of the moods. Transversed by the Ecuador, they do not know autumn or spring... ruin cannot do much more with them."

Herman Melville (1819 - 1891), North American writer who visited the Galápagos and called them the Enchanted Islands.

Herman Melville was not the only one who confused paradise with hell...This is the story of Martín Vargas.

... I am telling you, I had no idea abut this place. We boarded on February third heading to the archipelago. I did not want to suffer any hardship during the trip, so I gave twenty sucres to the cook and said: look buddy, we are three, you make us a cup of coffee, lunch and dinner ready. We were actually very well served: a jar of milk, loaf of bread, bologna, butter. One was very well fed. It was the three of us - my son, my wife and I. Besides, as we were cautious people, we were also carrying a sack of rice, a sack of sugar, meat, onion, cases of noodles and seasonings, just in case.   We arrived around this time, on February seventh, exactly forty years ago.

"The ship was lost, it ended up reaching Española Island. We drifted for a little bit until we reached San Cristóbal Island. The first look at the island scared me..."

"You thought it was hell?"

"Worse! It looked like a deserted island; believe me I was scared. I did not see a single soul. Only a  few little sad houses out there. It was a deserted hell."

Taken from The Path Darwin Did Not Take by Dédalo Danubio.

​Manuel Julián Cobos, his sugar empire and the curse of the guayaba

When one goes up to El Progreso one can see from far the ruins of the sugar mill that belonged to Manuel Julián Cobos (born in Cuenca in 1836 and killed in San Cristóbal in 1904) and two giant palm trees.  Cobos would send workers who did not follow his orders over to the mill to punish them. He would tied them up and hit them with sticks. Oh, and careful with eating guayabas! Those fruits of the plant who Cobos brought from the mainland and would not allow anybody to eat. An unlucky guy did not stand the urge to gobble up the fruit and was punished. Upset and in pain the guy put a curse on Manuel J. Cobos and spelt the "guava curse": if you eat guayaba here in San Cristóbal, you will always come back.

The Houses of the Second World War

The oldest houses in San Cristobal were made of imported pine wood planks, rescued from the American militar detachment that established in Baltra Island during the Second World War. When the war ended this establishment was abandoned. It wasn't recycling, it was a simple act of human survival. Many people can live with what others squander; they were wise to feel satisfied with little.

The houses were scorned by the owners, but the old Galapagos settlers gave them value. Now the houses, almost a century years old, are rickety but worthy; and despite they were build for the war, they ended up turning into peaceful homes.