"I, from my space, and you from your time." The Source of Life, a sculpture by David Basantes, was acquired by the San Cristóbal Municipal Government. The Great Merlin or swordfish jumps through his world, the sea surrounding Galapagos Islands. It is coming out of a cylinder (without beginning or end), which represents the lush underwater life of the archipelago.

Made with recycled concrete and coated with ceramic pieces, the Great Marlin is surrounded by a rounded fountain. At one end of the pool lies a sculpture of the famous rock formation called Leon Dormido (Sleeping Lion or Kicker Rock), which represents the environmental awareness and respect for life.

human settlements in the Galapagos Islands 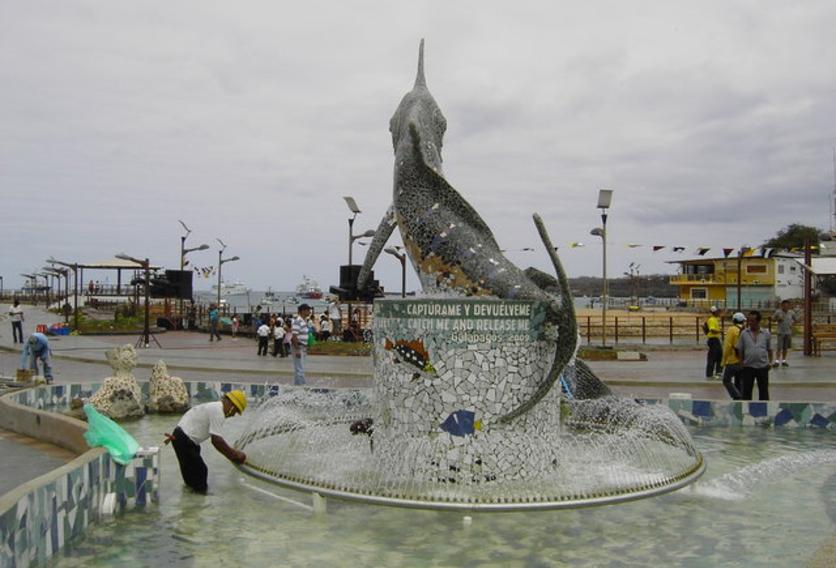 the source of life

Although the islands have formed thousands of years ago, human settlements date from the nineteenth century only. The first Ecuadorian settlers in the Galapagos were farmers and fishermen, represented in this Mural made by David.  The artisan hand depicted in the mural represents the survival efforts by early island settlers.

The current Galapagos residents are engaged mainly in providing creativity and intellectual knowledge to continue with the development and conservation of the islands. In the mural, they are represented by the artist hand.

​More sculptures, by Andrés and David Basantes, can be found around San Cristobal, the pier and the airport.